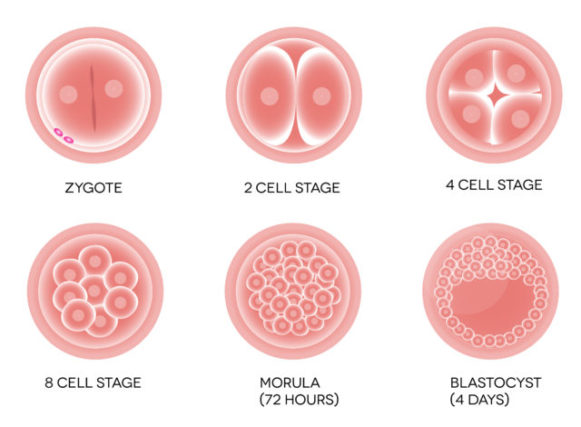 Human development begins at fertilization when an oocyte (ovum) from a female is fertilized by a sperm (spermatozoon) from a male. Development involves many changes that transform a single-cell, the zygote, into a multicellular human being.

Embryology is concerned with the origin and development of a human being from a zygote to birth.

The hollow cellular mass that forms in the first and second weeks after the zygote and morula stages and before implantation in the uterine wall.

The trophoblast will eventually form the placenta. The inner cell mass continues to give rise to the embryo and is the source of true embryonic stem cells.

Science consistently demonstrates when the life of a new human being begins: at the onset of fertilization (i.e., when the membranes of the egg and sperm fuse).  The “moment of conception” is the second it takes for this fusion to occur, and when the new organism in its unicellular form – the zygote – is created.

The zygote is a new type of cell, as its composition and behavior are distinct from the gametes from which it arose. Immediately following gamete membrane fusion, the newly created zygote’s first task is to modify its composition so as to prevent the penetration of other sperm.

And, a New Organism

The zygote is also a unique, living, complete organism…a member of Homo sapiens in his or her unicellular form. A zygote intelligently and predictably organizes its parts in preparation for the next stage of the known pattern of human development.

We exist in our zygotic form for only a few hours as our job is to divide as soon as possible.

Existing as a one-celled organism is not unique to the human being. Homo sapiens is one of almost a million cataloged species of organisms within the animal kingdom, all of which start life as a single cell.

Sacred Heart Guardians and Shelter (SHG) strives for a society where embryonic human beings are respected as fully our brothers and sisters, and all human life is respected from the very first hours until natural death.